Talks around the Ford Bronco community have been going wild as one owner claims that the soft-top on his 2021 Bronco failed in such a spectacular fashion as to fill the entire inside of the vehicle with snow during a blizzard at his northern Canadian home. 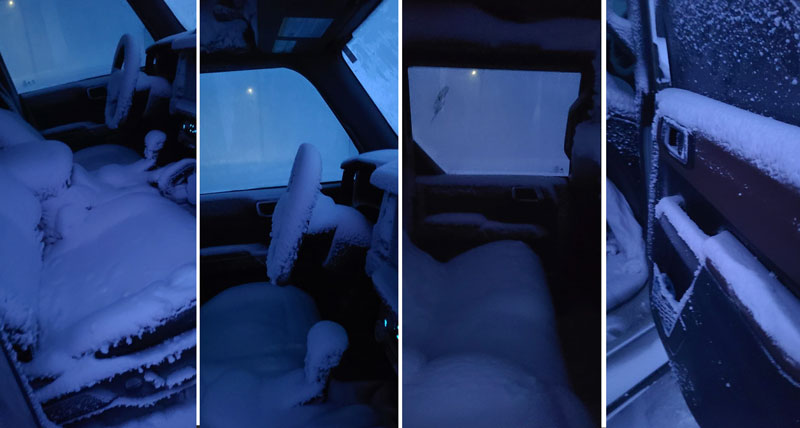 Those following the Bronco thus far have probably noted that the hardtop versions of the truck have had some issues. Bronco owners have been reporting at the hardtops on their trucks have already been starting to come apart. This issue, though, seems to come alongside the soft-top version of the SUV also having some early indications of issues.

In the story that seems to have originally been reported on by The Drive, it looks like one Bronco owner had a bit of an issue with his soft-top version of the SUV. Apparently, the Canadian Bronco owner left home to go on vacation. With the soft-top allegedly latched, he would return home to see his SUV filled up with snow. The photos posted by the truck's owner, Tyrone Raddi, almost look like the truck was left out in a blizzard without any top at all. However, Raddi insists that the truck was completely sealed up when he left it and that 50 mph winds were to blame for the failure of the Bronco's soft top. Other Bronco owners on forums around the web seem to have their own opinions. While some believe the story, others are up in arms saying that the story is one great big hoax. Some folks seem downright angered by the news.

The Drive reached out to Ford. A spokesperson responded: "We've only seen something like this when the roof has been left open or unlatched. The customer should flag this concern with their dealer to inspect what might have happened in these photos. If there's an issue, he would be covered under warranty. However, until an inspection is completed, this is all speculation."

This isn't the only example of a Bronco soft top failing. This owner also shows video evidence of 100 mph hurricane winds nearly lifting the top off of their Bronco.

We haven't heard of a recall impacting the soft-top just yet. However, Ford has been replacing hardtop roofs on all 2021 Broncos.Those with 2022 Broncos should have received their trucks with the issue already remedied.