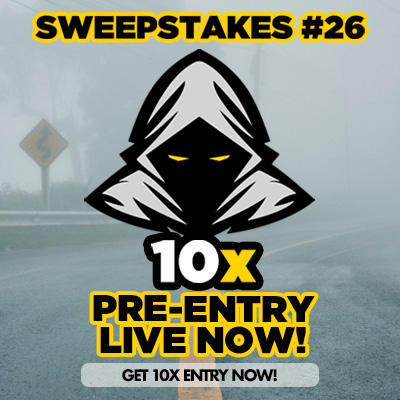 VH1 Giveaway Corvettes Left to Rot, Restoration is Under Way* Click the image below ...

* Click the image below and get entered today for free! *

* Yes... you read that all right, no purchase necessary *

At one point in time, the music television channel known as VH1 was struggling and struggling bad. During a period of downturn, they needed a big bump for falling ratings and dwindling revenues.

Their answer was a publicity stunt that was was a complete hit. When they decided to give away a collection of Corvettes, VH1 was pulling in revenue hand over fist for the time being and one lucky entrant went home with, count them, 36 cars, a Chevrolet Corvette for every model year up until the giveaway in 1988 was included.

By calling in and entering his name, a gentleman by the name of Dennis Amodeo won the contest, but delivery of these cars didn’t go according to plan. Somewhere during the process a graphic artist known as Peter Max took interest in the group as subject matter for a piece he was working on and Amodeo gave up the joy of such a collection in the name of a few bucks and a share of the art.

Even though it seemed like a grand (or 250 grand) idea at the time, one thing led to another, an IRS investigation was thrown into the mix and the cars would never see their part as an artistic subject. Rather they sat in a Brooklyn basement, former home to the New York Daily News printing plant, for years, never to be seen again… until now.

As of late the cars have been purchased by a new group of buyers. Although these people aren’t avid Corvette enthusiasts like we are, they are determined to bring the collection back to life!

They’ve already started the battle with the 1953 Vette and plan to have all cars at auction by next spring. This would be an awesome collection to have a piece of and even cooler to own as a whole.