They call it “The Zoo”, and it’s exactly what one would expect of a ...

They call it “The Zoo”, and it’s exactly what one would expect of a track with such a nickname. Brainerd International Raceway is party central, with throngs of race fans converging on the picturesque Minnesota facility for a weekend of racing and partying with several thousand of their closest friends.

The Last CTS-V3 sweepstakes is LIVE, enter below!

Three time Top Fuel world champion Antron Brown finally broke through to take his 50th career win in the class and first win of the 2018 season two weeks ago at Seatlle, extending the number of seasons he’s won at least one race in Top Fuel to 10 and providing he and his team with a huge confidence boost as the NHRA’s “regular season” winds down. He and the Matco Tools sponsored team roll into Brainerd in 6th place in the championship points and are looking to build on their momentum as they head toward Indy and the Countdown to the Championship. Said Antron, “We got everything in a groove and we’ve been doing it one run at a time. Our main focus was always to get better every race and learn this new combination and make it work. All the media, all the fans, they’ve kept telling us all year that it was going to be OK. I knew it was going to be OK, this is just drag racing. You just have to stay with it and it will get better.”

Brown’s DSR teammate Leah Pritchett will also bring momentum of a different kind into Brainerd. Entering the weekend as the reigning event champion, she and the Mopar/Dodge team proved last year that they know how to win at the track that’s known for setting records annually. In fact, Pritchett left The Zoo last year with a #1 qualifier, a race win and a brand new world record, capping off a dominant performance. “Last year was a perfect scenario of conditions, of rising to the occasion on every level from the tuners to the crew, to making sure everything was perfect. We were able to make that all come together and execute it. That’s what is so exciting. It was a sense of satisfaction, gratitude and justification when everything came together,” said Leah of the 2017 event. Looking forward, Pritchett, who enters Brainerd in 4th place says her team is focused on making progress in the points as the regular season comes to a close. “That feeling and momentum are still with us and I feel it will be with us when we go into Brainerd because it will be those conditions you look forward to. Our focus is moving up in the points.”

Clay Millican is literally one point ahead of Leah in 3rd place after a solid Western Swing. Millican and the Great Clips/Parts Plus/Strutmasters team have had their best season since joining the NHRA two decades ago and are looking to focus on consistency as the countdown nears. Tuner David Grubnic has proven he can make the power to run at the front of the pack by putting Clay on the pole for half of the races so far this season, but they’ve battled overpowering the track in eliminations. Were it not for that issue, Millican would likely still be battling for the top spot with points leader Steve Torrence, but the team is happy with their season so far. Look for Grubnic to swing for the fences in qualifying at a track that’s known for producing record numbers in the evening sessions.

In Funny Car, Ron Capps has proven he was serious about his prediction of catching points leader Courtney Force before the Countdown to the Championship. Following a Western Swing that found him in all 3 finals and one winner’s circle, Capps has closed the gap from over 300 points down to 154 and has huge momentum going into Brainerd, the next to last race of the regular season. “We talk every year about the Brainerd race being that point in the season when the teams get what we call ‘Countdown-ready.’ That can mean a lot of different things for different teams, but for our NAPA team, it’s always meant that we want to make sure that we have our team, our tune-up, and everything lined up for us to be able to start the Countdown and run for the NHRA Mello Yello Championship once again. Brainerd always plays a crucial part of the Countdown, whether you’re fighting to stay in the top 10, or like us, fighting to gain the number one spot going into it,” said Capps.

Jonnie Lindberg continues to struggle with consistency on race day, but has proven once again that his Head Racing Mustang is more than capable of running with the top names in Funny Car. Car owner and tuner Jim Head put Lindberg in the top half of the field at Seattle, but drew eventual race winner Capps in the opening round. With a berth in the Countdown all but impossible at this point, look for Head and crew to start taking chances to try to go rounds and pick up their first race with with Lindberg in the driver’s seat. It’s the teams that have nothing to lose that often disrupt the Countdown and wreak havoc with those teams chasing the championship.

In Pro Stock, Alex Laughlin is debuting a brand new (to him) Jerry Haas-built Dodge Dart at Brainerd. Laughlin is making the switch to try to find better performance on the top end, where his Camaro seemed to be cursed for the first half of the season. While his Elite teammates Erica Enders and Jeg Coughlin Jr have combined to win four races in their Camaros, Laughlin languished for most of the season, failing to tally a round win between Phoenix and Sonoma. Despite the slump, Laughlin finds himself still mathematically eligible to earn a spot in the Countdown, though he does have a huge deficit to overcome. Hopefully the change of chassis and body will prove to be what he and his team need to find their way to the winner’s circle. 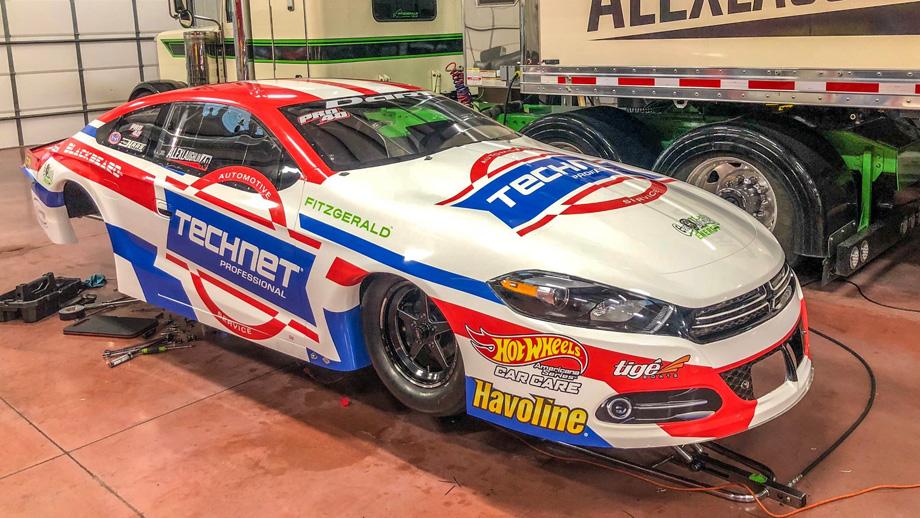 As always, Fox Sports will bring the action into you living room starting on Friday at 6pm ET with Friday Nitro Live, then on Sunday the finals will come at you live at 2pm ET, both of those on FS1. As always, the NHRA has it’s All Access stream available for those who want to watch the action in real time. That’s available through their website for just $15 for the whole weekend.

DON’T MISS the action from the #BrainerdNats this weekend on FS1! #NHRAonFOXFriday Nitro Live August 17 at 6p ETQualifyingAugust 19 at 12p ETSunday EliminationsAugust 19 at 2p ET